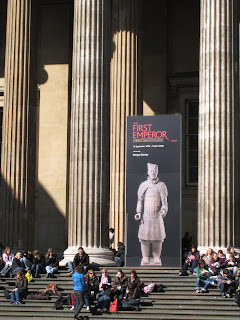 It was very difficult to get tickets for this exhibition not only was it over subscribed but the system for purchasing tickets was not easy or user friendly. Having given up hope of seeing it some weeks previously we were amazed by chance to find tickets for sale at a convenient date and time. Entrance to the exhibition was on a timed ticket. It felt very crowded and people kept standing to listen to the headphone information rather than looking at the exhibits. It was therefore very difficult to see some of the exhibits.

However, the terracotta warriors were impressive. They were made in a batch system so the experts made the heads and other craftsmen made the limbs and bodies. Those who made the legs also made the drainage systems and their provenance was obvious. The size of the warriors was impressive and the difference in their expressions was fascinating.

The first emperor must have been an amazing person. He came to the throne as a young teenager and decided to conquer the surrounding lands so all his reign was taken up with war. He died in his forties so began the project for his tomb quite early in his reign. The whole enterprise seemed quite overwhelming and it would have been a nightmare to live under him as he was a despot and the country was continually at war. However he could not have achieved all he did if he had been a different person.
Posted by Carol Q at 04:44