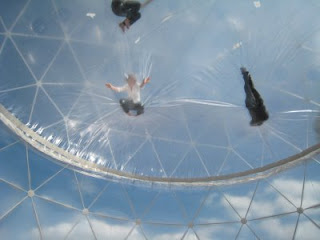 This exhibition at the Hayward shows the works of artists who create habitat-like structures. Some were more successful than others. The picture shows the roof of Tomas Saraceno’s Observatory. We went into this transparent dome and sat on the floor and observed people moving about in the layer above us supported by a pillow of air, it was warm and relaxing and rather like swimming with the movements above us. Rachel Whiteread’s Place (Village), a collection of dolls houses lit from inside in a dark room, worked well and gave you the feeling that they were inhabited. On the other hand I felt the Mike Nelson’s installation didn’t quite work. It comprised two adjoining rooms that had been smashed up and were supposed to be like a set for a non existent film. However I felt the damage was too contrived and all at the same level round the walls, rather than a real accident. I thought the exhibition was well staged and the layout was interesting - you didn’t know what you were going to come across round the corner and different paths led you to different places, which maintained your interest all round the exhibition.
Posted by Carol Q at 03:08