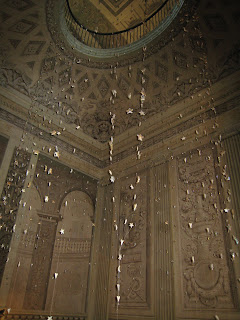 We came across this exhibition in the Music Museum in Bologna. Unfortunately there was no catalogue or any explanation of the exhibits but they seemed to deal with identity and clothing. There were several ‘dresses’ made of lace and see through material mainly in white and ecru, some hanging on hangers, others suspended from the ceiling and some hanging in front of patchwork hangings. There was also an interesting installation based on a Mexican custom linked to shrines and amulets. In Mexico they sell small sewn hearts individually in boxes and call them miracles. In the installation these amulets and others were pinned on to different ‘shrines’ depicting ‘saints’. This was similar to the amulets we had seen at various shrines in the churches. Unfortunately I was not allowed to take photographs and there were no postcards. This photo was taken on the staircase just before we entered the exhibition and depicts small amuletic shapes hanging from the ceiling.
Posted by Carol Q at 10:29