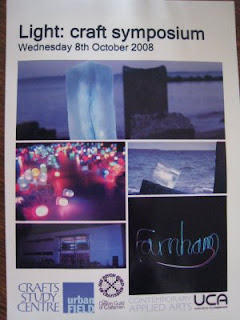 There were five speakers at this symposium. The first was Bob Martin (Visual Arts Officer (Crafts) for the Southeast). He talked about his love of shadows and showed us images of the work of several artists who use shadows as an integral part of their work including Matthew Chambers (ceramics), Mary Butcher (basket weaving) and Dail Behennah (wood and stones). He discussed Shadows of men a project he was involved with at Garth Prison and Under scan an installation at Derby using surveillance systems and video cameras. The videos, activated by passers by, show a person on the pavement talking and moving and interacting with the audience. The work is by Rafael Lozano-Hemmer and can be seen at www.threecitiescreate.org.uk.

The second speaker was Georgina Williams, a textile artist from Winchester. She uses new smart materials to bring light into fabric without electricity. This is done using phosphorescence which is applied to the woven surface of the fabric. It is ideal for stairwells and lift shafts to light them up at night.

Peter Freeman who creates neon light sculptures spoke next. He said that for him light is the medium and the message and that all art involves manipulation of light. He showed us illustrations of several of his projects, among them the Woking Lightbox, which responds to people moving in the building and his sculpture near Weston Super Mare on the M5, which changes on different days.

Tine Bech, a visual artist from Denmark, was the fourth speaker. She explores the membrane between the body and the world and is interested in how we respond to art works. She described some of her projects and explained that she is producing an installation through Farnham and across the Maltings bridge http://www.tracinglight.co.uk/.
The fifth speaker was Laurie Lea whose light in glass photographed on the sea shore was very attractive.

This was a very interesting symposium. I thought the Under scan video project in Derby sounded fascinating and it fits in with the work I have been doing on the uncanny, as the figure on the pavement seems to turn on you and try and grab your legs. The artist is Rafael Lozano-Hemmer and I have discovered that it is going to be shown in Trafalgar Square from 15 to 23 November so I will go and see it for myself. I was also interested in the interactive projects Tine Bech has been involved in especially those combining sound, light and audience participation. I admired the work of Peter Freeman, but it is on such a large scale that it does not relate to my own work.
Posted by Carol Q at 01:37