Babylon at the British Museum 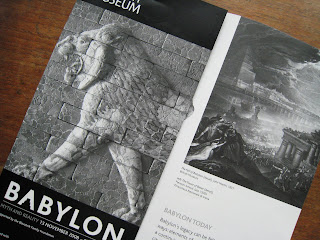 This exhibition at the British Museum had the subtitle ‘myth and reality’ and that was the focus of the exhibition. Different areas concentrated on the Hanging Gardens, the Tower of Babel, Nebuchadnezzar, the rivers of Babylon, Daniel and the kings, and Belshazzar’s feast. Many of these subjects were familiar in a vague way but it was interesting to be given more details and place them in a historical context. For example, there was information about the importance of interpreting dreams and Daniel’s role in doing so and about the conquest of Jerusalem and the deportation of the Jews to Babylon. Much of the exhibition was taken up with depictions of these Biblical references from ancient times to the modern day but there were also many artefacts from Babylon including several interesting cylinders of cuneiform script.
Posted by Carol Q at 03:40