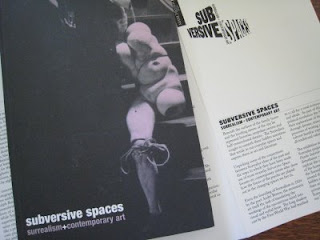 This exhibition in the Whitworth Gallery, Manchester aimed to examine the legacy of Surrealism in domestic spaces and the city. It included work from Surrealist artists such as Giorgio de Chirico and Rene Magritte and from contemporary artists who use the surreal in their work. It was divided into two areas: psychic interiors and wandering the city.

Psychic interiors dealt with subversion of the domestic interior and included Tony Oursler’s The most beautiful thing I’ve never seen and Robert Gober’s untitled leg sticking out from the wall. It also introduced me to the work of Francesca Woodman. I was intrigued by her ephemeral photographs of herself disappearing behind wallpaper and a fireplace.

In the section on wandering the city I was attracted by the idea of liminal spaces, passages and boundaries and the way people suspend everyday behaviour during mundane journeys leaving themselves open to new experiences. I was intrigued by the photographs of Marie-Ange Guilleminot walking round the streets at night in a luminous gown producing eerie photographs like illustrations in a gothic novel.

I found this exhibition fascinating but because it was so far to go I had limited time to view it. Since returning home I have read the informative catalogue and found out more about some of the artists who were new to me and I will go and see it again when it is shown at Compton Verney later in the year.
Posted by Carol Q at 02:40