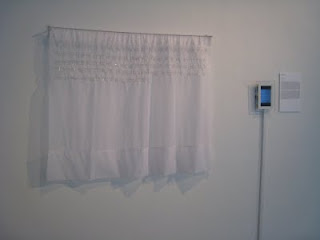 The research students at UCA recently held a conference and exhibition at Farnham. This picture shows my exhibit entitled ‘Marking time’. I am studying net curtains and how they can be used to re-read the relationship between the domestic, the Uncanny and the Gothic. In particular, I am interested in the Uncanny feeling described by Freud that occurs when the familiar becomes strange, and the boundary between the homely and unhomely is blurred. This boundary, the liminal space between home and not-home, is represented by the net curtain. ‘Marking time’ conveys the position of a young woman trapped in the home and longing for escape but fearful of what may lie beyond, reflecting the duality of the home as sanctuary and prison. The net curtain pierced with pins and needles alludes to a prisoner marking time, but the misuse of feminine sewing equipment suggests a subversion of the domestic. The words of the accompanying ‘virtual’ cross stitch sampler reflect the conflicting thoughts of the trapped seamstress and they fade in and out to reflect aspects of her inner turmoil. The complete text suggests the fragility of her mental condition.
Posted by Carol Q at 04:01