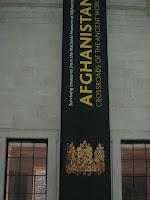 This exhibition at the British Museum shows treasures from Afghanistan from four archaeological sites ranging in time from 2200 BC to the first century AD. They are rightly called treasures as most of the artefacts on show are extremely fine examples of craftsmanship and obviously belonged to those of high status. Their diversity also reveals Afghanistan’s position as a crossroad for ancient trade routes. The incised gold bowls dating from 2200 BC from Tepe Fullol show evidence of a wealthy Bronze Age civilisation. The statues and stonework from Ai Khanum come from the site of a Greek city founded by one of Alexander the Great’s generals in 300 BC. At the third site, an archaeological investigation at the ancient city of Begram found two sealed store rooms containing Roman glass, Indian ivory furniture and Chinese lacquerware. The examples exhibited here are outstanding, especially the coloured and shaped glass containers. However, the most impressive artefacts come from a nomad cemetery excavated at Tillya Tepe, in particular the golden crown shown on the poster. This is made so that the elements shimmer and move to catch the light, and it can also be dismantled for transport. Over 20,000 pieces of gold jewellery were buried in these graves. They are certainly impressive now and must have been even more so when they were worn in the first century AD.
Posted by Carol Q at 11:03