Bite-size: miniature textiles from Japan and the UK 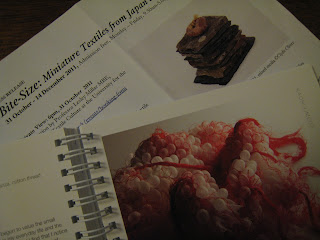 This exhibition at the Daiwa Foundation, curated by Lesley Millar, celebrates 15 years of collaborative textile exhibitions between Japan and the UK. 51 artists are represented, who have all worked with Lesley on previous exhibitions, and all had to produce a miniature work, which in most cases were displayed on identical white plinths around the gallery.

It was interesting to explore the exhibition without a catalogue to try and identify the artists; some were easier than others and there were some surprises. With so many exhibits it is impossible to describe them all, but some of my favourites were Philippa Lawrence’s Something from nothing, a frothy mass of seared parchment; Clyde Oliver’s Little cairn, made of slate with a pebble carefully balanced on the top; Kiyonori Shimada’s Division, a small sculpture of gathered cotton cloth trapped in a simple wooden shape; Reiko Sudo’s Polygami, an exquisitely folded polyester cloth; and Kaori Umeda’s Red and white, made up of small polyester polyps linked and trapped by red threads.

At a lunch on the day after the opening some of us were lucky enough to hear some of the Japanese artists describing their work and the inspiration behind it. Many of them had tried to include a link between Japan and the UK into their work for the exhibition, for example Chika Ohgi had referenced the star patterns prominent in the sky over London and Yuka Kawai had used materials brought on a previous visit to London. The friendship and good humour shown at the lunch revealed that on many levels, the exhibition certainly succeeded as a celebration of AngloJapanese textile art.