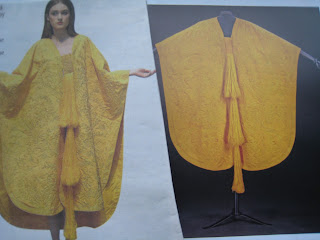 This golden gossamer cape on display at the V&A until June is made from the silk of over a million golden orb spiders, which are native to Madagascar. Apart from the extraordinary material it is made from, the cape is a beautiful object in its own right. It is hand woven and embroidered with motifs including spiders, while the golden colour is natural. Gossamer cloaks are unlikely to be seen on the high street though. Not only does the fabric contract when it gets wet, but it also took about 4 years to make in the workshop of Simon Peers and Nicholas Godley in Madagascar and involved a team of spider collectors as well as weavers and embroiderers.