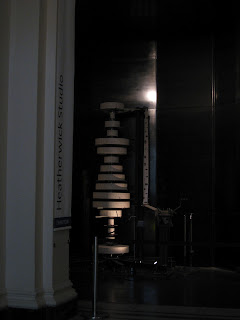 This exhibition of the work of Thomas Heatherwick’s Studio at the V&A was fascinating and comprehensive. It covers architecture, engineering, sculpture, shop design and even Christmas cards. As you enter the exhibition you are invited to roll off your own ‘catalogue’ from the apparatus shown above. This results in a long ribbon of paper about 1 metre long and 10 cm wide, which puts you in a playful mood for what you are to see. I found it interesting to see how people then customised their ‘catalogues’ – I rolled mine up, other people folded them (zigzag or straight), some hung them over their arms and one woman used hers as a scarf. So before we’d even entered the exhibition we were being encouraged to be creative.

Many of the earlier designs had been made by Heatherwick when he was a student and had developed from folded paper and linked wooden forms (for example Pavilion 1992 at the Cass Sculpture Park which I’ve photographed before, see my post in November 2007). The exhibition is packed with interesting ideas, showing their inspiration and how they were developed. One of my favourites is the Rolling Bridge (2004) in Paddington Basin which curls up to form a hexagon on the side of the canal then unfurls to form a bridge across the water. I hadn’t realised though that it had been developed to form a Large Span Rolling Bridge where two of them unfurl from opposite sides of a river to meet seamlessly in the centre – poetry in motion. I was pleased I visited the exhibition after the Olympic ceremony because it included a model of the Olympic cauldron and videos showing how it was developed and tested - another magical engineering feat from the Heatherwick Studio. The exhibition runs until the end of the month and is definitely worth a visit.