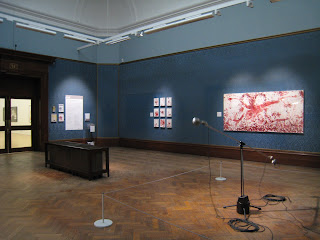 ‘No borders’ is an exhibition at Bristol Museum and Art Gallery which brings together 12 artists from the Middle East, Africa and Asia to consider how we are all linked through history, politics and economics. As you enter the gallery you are met by Shilpa Gupta’s seesawing double microphones and hear her performance of speeches by Jinnah and Nehru from 1947, when India became independent and Pakistan was created, emphasising the similarity of the two. Her image of a flag composed from a poem made out of high visibility tape saying ‘There is no border here’ also considers the abstract nature of borders. Ai Weiwei’s ton of tea questions the border between art and function and Walid Raad’s work questions the border between fact and fiction, while Akram Zaatari’s video of a typewriter romance considers the function of social media. However, some of the works seem to emphasise borders rather than erase them. Haegue Yang's blinds consider feelings of displacement and isolation, while Hala Elkoussy’s photographs of Cairo emphasise changes within the city. Shahzia Sikander’s images consider colonial differences between Britain and India, and Amar Kanwar’s video highlights the daily marking of the border between India and Pakistan by the soldiers on either side of it. Zwelethu Mthethwa’s photographic images of sugar cane cutters and Yto Barrada’s images of illegal migrants from Africa into Europe sleeping rough emphasise their humanity but in doing so highlight the huge economic borders they have to negotiate. Imran Qureshi’s blood red gestural hand prints and linked images of Indo Persian lotus flowers commemorate the murders of two people at the hands of a vigilante mob in Pakistan, suggesting that for them the borders of justice were breached. I left the exhibition considering that ‘No borders’ was an ironic title as what seems to unite us all is the numerous borders and barriers that make up the stuff of everyday life.