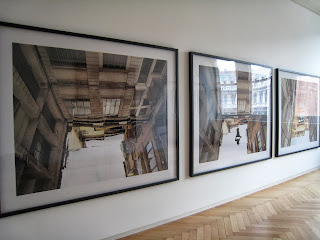 We found this exhibition by chance walking though Saint Mark’s Square. Not only did it provide a great view of the Square, San Marco and the Tower but there was also some interesting art. I particularly liked Variable space (2007-8) by Marina Paris (see image above), a series of photomontages of buildings that elided their material form and their reflections so you couldn’t be sure quite what you were looking at. It seemed very relevant to be showing it in Venice where the water in the canals confuses perception in the same way. Barbara Salvucci’s delicate drawing Ofelia (2013) was also fascinating. It covered three panels and depicted the shape of an insect’s wing in fine ink lines that crisscrossed each other to provide depth and life to the form. We discovered that there was another part to this exhibition but unfortunately it had closed last month – another facet of the Venice Biennale, where space and time appear to run at their own pace.