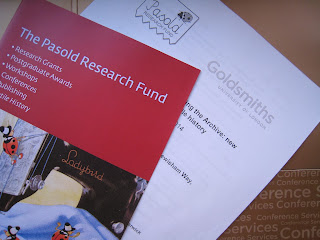 This 2 day conference last week at Goldsmiths, University of London, included 14 papers considering how tacit knowledge of material in textile archives can enrich research. Carolyn Steedman was the keynote speaker and she spoke about stockings and stays, without having examined any textile collections, which rather surprised the audience. Instead she used secondary printed historical sources to uncover the social history of stocking making. In contrast, Ariane Fennetaux had researched pockets and showed us that they could often be dated by their fastenings, laundry marks or embellishments, things often not recorded or visible in images of the artefacts. Another contribution I found interesting was the talk by Bernice Archer and Alan Jeffreys of the Imperial War Museum, on embroideries made by women in internment camps in the Far East from 1941 to 1945. Many of these embroideries recorded the women’s journeys from capture to imprisonment and were often the only record made of these events. Some of the pieces recorded the names of those in the camps and often were made and hidden from the prison guards at great personal risk. On the final day, Annin Barrett and Caleb Sayan showed us the digital textile archive they have created and we then had a visit to the Goldsmiths textile archive where we saw a selection of the pieces it holds.