The subversive stitch revisited: the politics of cloth 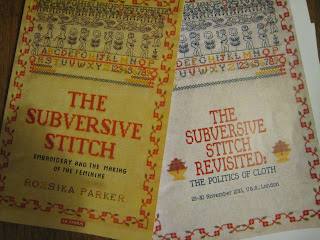 I really enjoyed this conference at the V&A last week. It explored the legacy of Rozsika Parker’s groundbreaking book ‘The subversive stitch’ and began with papers about the history of embroidery and then moved on to the politics of cloth today. As well as the papers it included some film screenings and workshops so it was a full programme. In fact such a full programme that I didn’t see everything because I was busy networking with new friends and old. For me, the highlights of the conference were Griselda Pollock’s paper on femininity, Jenni Sorkin’s interview with Elaine Reichak, Matt Smith’s paper on the Unravelled project and Kimberly Lamm talking about Ghada Amer. Unfortunately, Griselda Pollock couldn’t attend the conference but had sent her presentation instead. She spoke of Rozsika Parker, with whom she had collaborated, and told us about the power of textile and its cultural meaning. Elaine Reichak showed images of her embroideries that juxtapose traditional themes with modern texts and explained how one’s career is shaped by invitations to exhibit rather than a master plan. Matt Smith talked entertainingly about his work on the Messell family for the recent Unravelled exhibition at Nymans house. Many other presenters showed how textiles are being used as political weapons in ethical and social debates and are challenging structures of power using subversive stitching.