More thoughts on Lace at the edge 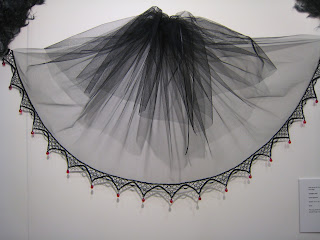 The next time Gail and I will exhibit the work from ‘Lace at the edge’ is at Harrogate, still as part of the Knitting and Stitching Show. Our stand at Alexandra Palace was rectangular but the one at Harrogate is much more square so we are having to rethink our display. When we started planning the exhibition, the aim was to intermingle our work, but when we actually came to set up that just didn’t seem to work effectively, so we ended up with my work at one end and Gail’s at the other. I think now we’ve seen the work on display we have a much better idea of which pieces work well together which we’re bearing in mind as we redesign the stand for its new shape. Other factors we will have to consider are the placing of the stand. At Alexandra Palace we were quite well inside the gallery block, but at Harrogate we are right near the opening so we’ll have to consider air draughts blowing the work and of course the temperature if it’s cold. We had a few draughts in London when the ceiling vents were opened and they wafted my black veils about in a suitably languid and sinister manner, so let’s hope we achieve that effect!
Posted by Carol Q at 02:16