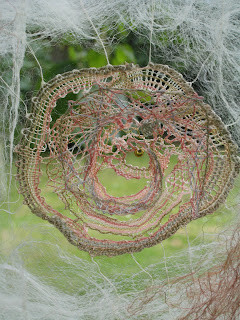 I hadn’t realised how much lace I had made based on biological themes until I wrote an article about it last month. I then found that I couldn’t include all the pieces in my 1000 word limit so had to leave many of them out. In the article I concentrated on my cell like pieces which are made of free bobbin lace without a formal pattern and include beads and tallies to suggest the parts of the cell. Some of those I had to exclude are the series based on a theme of genetics, chromosomes and cell division. An example is the piece above which was inspired by dividing cells seen under the microscope. It was made by producing a spiral piece of lace and then attaching pairs to the first piece of lace to add another layer to it, to give a three dimensional effect, as if the two layers were separating. Lace lends itself so well to reproducing the appearance of biological structures, with its combinations of holes, threads and more solid areas, that it should be no surprise that I’ve used it to represent so many different types of biological tissues.
Posted by Carol Q at 02:38

Wow, this is amazing! I make bobbin lace and have lots of questions about your process.
Do you make a pricking first or is it free-formed? I never thought about free forming or layering before seeing this. I presume you don't have the top layered pattern marked out either? ! I'm self taught and have made lots of bookmarks (good for learning techniques) but I'm getting bored with the strict structure. Thanks, Lucy

Most of my lace is free form - I just draw out a rough shape and go for it! For the second layer I separated the two layers with a slip of thin card between them. I recommend experimenting and seeing what happens!

Thanks very much for your advice! I'll have a go and see what I can do ♡