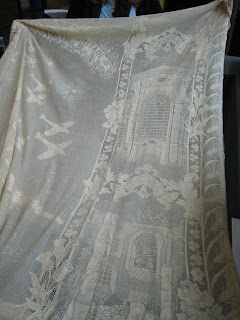 I spent a very useful day in London visiting all the places depicted on the Battle of Britain lace panel and taking contemporary photographs of the sites. It’s interesting to see how some places have been restored completely and look no different such as Buckingham Palace and the Guildhall, while others like the City Temple have been changed quite radically, and some such as the buildings in Queen Victoria Street have been swept away and replaced by a modern building. London has changed a lot since 1940 and several of the original views are now obscured by modern buildings and trees, however the aim was to photograph them as they are today which is what we achieved. The last venue on our itinerary was Buckingham Palace so I also visited The Queen’s Gallery, and saw the exhibition of Canaletto’s paintings of Venice and some of Rome. Both cities have changed little over the years so it proved to be an interesting contrast with London.
Posted by Carol Q at 02:10