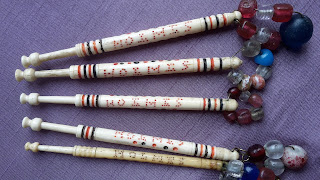 In my collection of lace bobbins I have a group of four named Jane Holmes, Ellen Holmes, Thomas Holmes and Eli Holmes. I assume they were all from the same family and I bought them as a group many years ago. Reading Christine and David Springett’s book leads me to think that they were made by Bobbin Brown of Cranfield in the mid nineteenth century. They distinguish his work by the neat lettering in red, the dome like shape of the bobbin’s head, and the red and black stripes and spots on the length of the bobbin. The sharp eyed among you will have noticed that there are five bobbins in the picture! That is because years later I found another bobbin with the name Eli Holmes on it. I don’t know if this is the same person as in my original group but I like to think it is. Also I’m not sure who made this one –the head looks like one of Bobbin Brown bobbins, but the shape of the bobbin and the tail look different and the lettering particularly the H and M look different as they have serifs unlike the lettering on the other four. Anyway I was delighted to find this additional bobbin and I do use them all so they are still in use after all this time.
Posted by Carol Q at 13:45