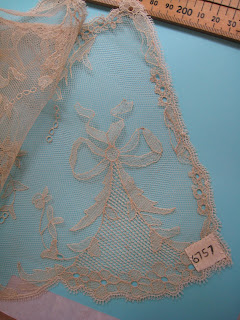 I’ve been doing quite a lot of needlerun lace recently for my Battle of Britain panel so was interested to find this example in the UCA Textile archive. It’s a collar worked by hand on a diamond-shaped machine-made net and while I’ve just been using outlining stitches this includes blocks of shaded areas as well. Embroidering on net was the first type of ‘mechanised’ lace and in the early nineteenth century numerous lace runners were employed in Nottingham to embroider the net produced on machines designed by John Heathcoat and John Leavers. Although lace machines were then developed that could produce patterned lace, the technique of needle run lace continued to flourish, particularly in Ireland. It had been introduced to the country by Charles Walker who took 24 skilled English women to Limerick in 1829 and set up production there using machine net imported from Nottingham. They trained local women to make needlerun and tambour lace and the technique soon spread to other towns although it is always referred to as Limerick lace. The reason I’ve been using the technique is that it is fairly quick and covers a large area quite easily – bobbin or needle lace would take considerably more time because you’re making the net as well as the patterns. Also, in my case, I wanted a technique that referenced the origins of the original Battle of Britain lace as a net curtain panel and working on machine net gives that link to machine-made net.
Posted by Carol Q at 12:58