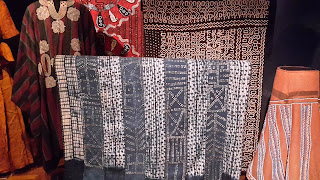 I enjoyed this small exhibition of African fabrics and clothing at Bristol Museum and Art Gallery. It is a brief overview of the subject which focuses on particular topics such as communicative cloth, commemorative cloth and the origins of patterns. It notes that much of what is known as ‘Africa cloth’ was instead made in Europe imitating a style from Indonesia and then sold in West Africa. This style originated in the early 1800s when the Dutch tried to copy Japanese batik designs to sell in Indonesia. However, the mechanised process they used led to crackling in the final product, which was not popular in Indonesia, but it proved popular with men from Ghana who worked in the colony, so the Dutch began selling it in Africa. 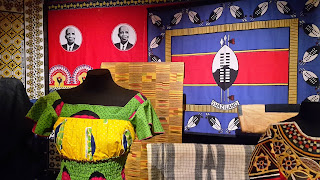 The section on communicative cloth focuses on the rectangular cotton cloth known as the kanga, which is worn as a body or head wrapper. These bold designs are surrounded by a border and include slogans that can be ‘messages to a lover or moral warnings to society’. In contrast to these more personal messages, commemorative cloths are worn by members of political parties to show their support during elections. The two shown in the image above represent the Malawi Congress party from the 1970s, and the renaming of Swaziland to the kingdom of eSwatini on 19 April 2018. As you can see from the images the exhibition includes far more and is worth further investigation. It runs until 19 May 2019 so there’s plenty of time to catch it.