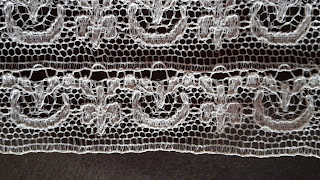 Lacer threads are used in machine lace production to allow bands of narrow edgings to be made as one continuous piece which can then be separated later in production. This allows the edgings to be handled as one piece for procedures such as scouring and dyeing, rather than having to cope with a tangle of thin ribbons of lace. Pat Earnshaw discusses lacer threads in her book about machine lace and notes that the most important thing about a lacer thread is that it can be easily removed. 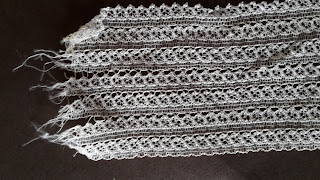 She says this can be done in three ways. First is to use a rover or straight knitted pillar which unravels when one end is pulled. Second is to use a rover that is made of a different yarn from the rest of the lace so it can be chemically removed by immersing in a solvent. Third is an inlay or draw thread which can be pulled out easily and these are the ones used in the examples here. This removal of the thread was called drawing and was traditionally carried out by young women, either working in the factory or at home as piece work.