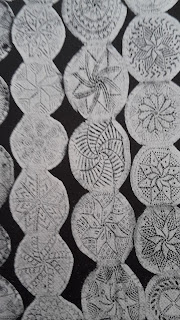 I’ve been reading Mary Thomas’s Book of knitting patterns and came across a chapter on medallions. She says that medallion knitting was popular in the 18 and 19 centuries as people used round medallions as bonnet caps and those in other shapes for making up into bedspreads, blankets and cushions. Round medallions are also the basis for lace doilies as well. The image shows a detail of an early 18 century sampler of bonnet backs. She explains how to build up the shapes using four or more needles and shows how this can be done in a geometric or straight fashion or with a swirl or bias to form hexagonal shapes. When drawing up a chart for a medallion she notes that you have to put in the building units first and then add the ornamental units that make the pattern. That’s one of the things I like about Mary Thomas – she doesn’t just provide a pattern she explains how you can build your own.

Interesting. I hadn't known about this patterning. Thanks for sharing.

Glad you found them interesting too