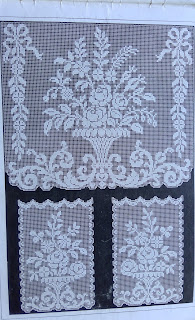 I haven't been blogging for the last few weeks because I've been on an amazing textile trip to India but that does mean I'll be writing about some of my Indian adventures so there will be lots of news to catch up on. In the meanwhile back to some lace! These filet lace designs are taken from a pattern book I have entitled ‘VII Le Filet Ancien au Point de Reprise’. They seem to be aimed at the home needlewoman and book includes adverts for two types of thread they suggest the pieces should be worked in. The fact that this book is number seven in the series suggests that they were popular. I assumed the designs were for an antimacassar and matching arm covers but the index refers to this page as designs for a window ornament and two brise bise so they are evidently meant to be worked on a large scale. The larger curtain would have been designed for a main window and the smaller two for the lower part of a window hung from a thin rod or wire along the scalloped edge. The term brise bise means ‘wind-breaker’ in French. Unfortunately there is no date on the book but brise bise became popular in the early twentieth century so it probably dates from that time.