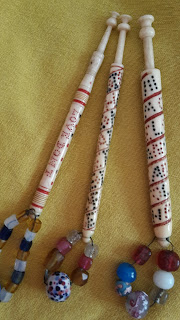 I’ve been winding bobbins for my latest bobbin lace project – the mat I’ve been designing in tape lace, which I’ll blog about once the lace is underway – and I came across these three bobbins about troubled love lives. They are inscribed with Love don’t forsake me; Let no false lover gaine my hart 1842; and Its hard to love and canot be love again. One poor lacemaker is trying to hang on to her boyfriend, while the other two have clearly had romance problems in the past. The one who doesn’t want a ‘false lover’ suggests she’s had one in the past who cheated on her. While the last one implies she’s found a boy she likes but he’s not interested or that she too is having problems getting back into a relationship. At least it shows that these problems did not start with social media – they’ve been going on for centuries! In fact T L Huetson in his book on Lace and bobbins records one with the inscription ‘Place no confidence in young men’ – a warning that any young girl would be wise to bear in mind! I think the first bobbin on the left was made by Bobbin Brown of Cranfield, the middle one was probably made by Jesse Compton and the one on the right is probably by David Haskins who came from a family of bobbin makers.
Posted by Carol Q at 09:28

Truly fascinating, Carol. They are lovely things in themselves, these. I'm much struck by the 'false lover' aspect, which immediately reminded me of Sergeant Troy and Fanny Robin in 'Far From The Madding Crowd' and the brutal reality that a woman left pregnant by such a man was often ruined and, indeed, doomed. The Magdalene laundries of Ireland are an illustration of the social opprobrium - especially sharp in a place then so utterly controlled by extreme Catholicism - heaped upon young women who became pregnant, often when they had been abused (no doubt at times within their own families). Thank you for a super post on this, for these objects shine a clear light on history.