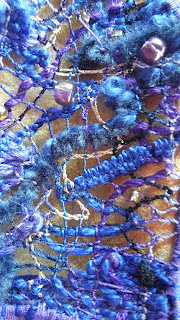 Texture is the prompt for the Instagram textile challenge today so I thought I’d write about texture in bobbin lace to go with my image. The easiest way to introduce texture into bobbin lace is to use textured threads such as chenille or something with a slub in it. Just as accent threads though, using all textured threads would probably result in a rather dense unlace-like textile. Adding beads or snippets of trapped thread also adds texture. However, more traditional ways of introducing texture into lace include using a thicker gimp thread to outline areas of work or produce patterns within the work. 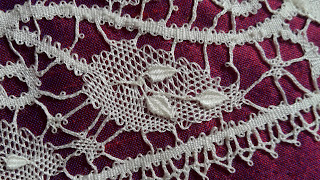 Raised tallies and leaves worked over flatter areas of ground are also a traditional method for including texture. Tallies are small dense rectangular woven areas worked generally with two pairs of bobbins, while leaves are made in the same way but shaped with pointed ends to resemble leaves. Both can be used in open work or made over flatter parts of the work. As you can see in this piece I’ve worked a branch of leaves over a half stitch background. This was done as the work progressed not added later and the bobbins were incorporated back into the work. 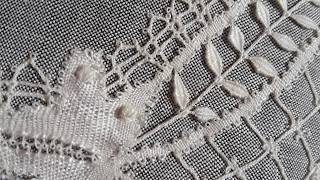 Rolled tallies were also used in East Midlands lace in which a rectangular tally is made and then rolled back on itself to incorporate the bobbins back into the work leaving a raised rolled line of weaving on top of the lace. This image shows a couple of rolled tallies made in the cloth stitch ground and a line of paired leaves in the background all adding some texture to the lace.