The rebato – supporting the lace collar 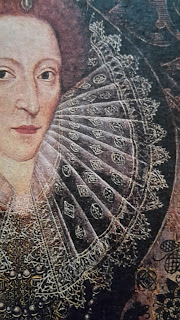 Many lace ruffs were starched to stiffen them and keep them in shape but larger lace collars such as this one were attached to a supporting frame to show off the lace. There were various types of supporting frame but today we’re focusing on the rebato. 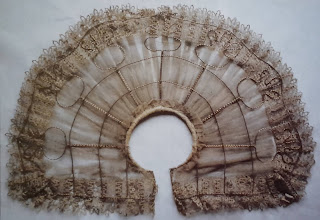 Rebatos are wire frames made up of twisted wires, which often appear quite lacelike in their own right. They would have been made by silkwomen and some are wrapped in plain or coloured silk or even metal threads which would glint through the lace collar at the front and appear quite distinctive from behind and probably looked stunning in candlelight. Many, like this one were covered in gauze or cotton with a simple lace edging attached round the edge but others were left plain. 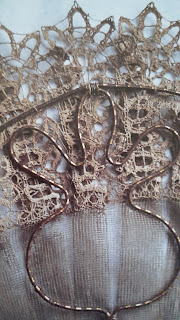 The lace was sewn onto the frame using simple oversewing so it could easily be removed for laundering, although many incorporated a black silk edging round the neck edge so the dirt wasn’t too obvious! A basic frame could also be reused for a different lace collar and any lace scallops protruding from the edge of the support, like the ones here, would have to be stiffened with starch to make them stand up.