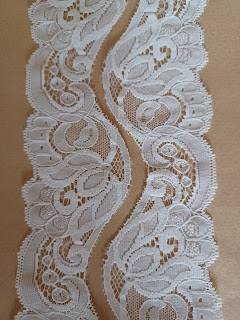 If you follow this blog you will remember that I recently received some samples of machine made lace from the 1970s designed for the lingerie industry. They also illustrate some interesting production methods used by the machine lace producers. For example, the image above gives an idea of how scalloped edged lace trims would have been made in one piece of lace with open net areas linking the two pieces, which would have been cut away once the lace came off the loom to separate the two scalloped edges, thus allowing the lacemakers to produce many strips of lace all together and save production time. The image below shows some strips of lace made in a similar way, linked together by joining threads which would have been pulled out once the lace was finished leaving the ribbons of lace. 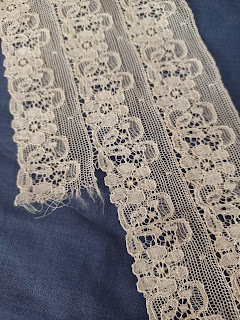 The pretty black lace below was made on the Levers lace machine. It has a fine background pattern and an outlining thicker gimp thread highlighting some of the motifs. 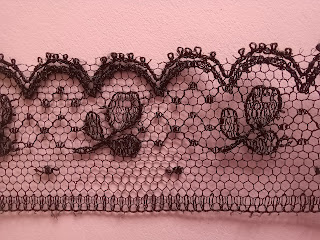 The heavier black thread would have been used to outline one motif and then been allowed to run loosely down the side of the lace pattern until it was required for the next motif, which meant that the loops of loose thread had to be cut and trimmed once the lace left the machine. Both sides of this lace also show remnants of the threads that joined it to the other strips it was made with. 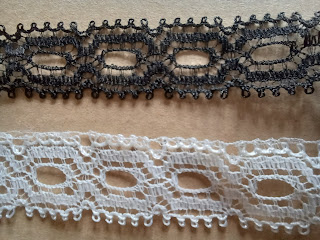 These two pieces of lace have picot edgings on both sides, but the white piece still retains a thin thread along its righthand side which was used to help form the picots and as a joining thread between this strip of lace and the one next to it. Many of the joining threads between the strips of lace were designed to be pulled out quite easily but some types had to be removed by heat treatment using a tool like a soldering iron and others had to be cut with trimmers. Much of this work was carried out by women working at home on a piece-work system.