Draught for a machine lace curtain 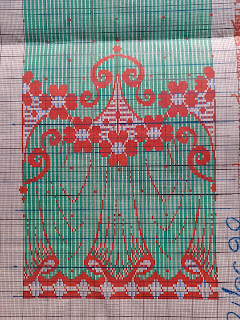 This pattern holds the information needed to produce a lace curtain on the Nottingham lace curtain machine. This image shows the bottom half of the design and the one below shows the heading. The designer would have produced the original design and then passed that to the draughtsman who would have converted it into this series of tiny colour-coded squares. This draught would then have been passed to the card puncher who would have followed these instructions to punch out the jacquard cards that operated the threads on the machine. The squares are painted red, green or blue or left blank according to the thread movements. There was no standard system for the colours but in general red indicated back spool ties, green represented Swiss ties and blue represented combination ties. 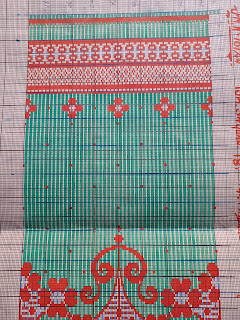 The draught also includes information on the fineness of the lace, in this case 10 point which is a medium gauge, and the quality (54) which is a measure of how many complete motions of the machine were required to make 3 inches of lace. I love the way this pattern incorporates stylised swags and draping at the bottom which would have required some skill on the part of the draughtsman to convert from design into instructions for the machine. I also like the spotted net between the main design at the bottom and the flowers at the heading which could have been expanded by repeating that section to make curtains of varying lengths. All in all a versatile and very pretty lace curtain.