Floral images in the Battle of Britain lace panel 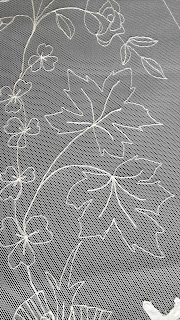 The original Battle of Britain commemorative lace panel was made by the Nottingham lace company Dobson and Browne just after the second world war. The designer Harry Cross incorporated several floral images into the work including those representing the four countries of the United Kingdom and the floral emblems of the Commonwealth countries whose airmen took part in the battle. In 2016 I was commissioned to produce a contemporary response to the Battle of Britain panel and as part of that work I produced a needlerun lace panel incorporating the same floral images as used by Harry Cross. The images here are both of my response to the original panel. 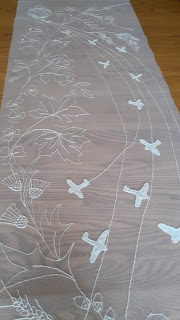 Unlike Harry Cross, I confined my botanical images to the central panel of the triptych and interlinked them to wind up the right side of the net background in contrast to the aircraft sweeping down from the left. You can see most of them in the image above including the rose of England, the thistle of Scotland, the daffodil for Wales and the shamrock for Northern Ireland. There is also protea for South Africa, wattle for Australia, a fern leaf for New Zealand, and a maple leaf for Canada. Harry Cross also included a tudor rose and oak leaves, which I did not incorporate in my panel, as well as acorns and wheatears, respectively signifying regrowth and the time of year at which the battle took place, which I also included in my lace.