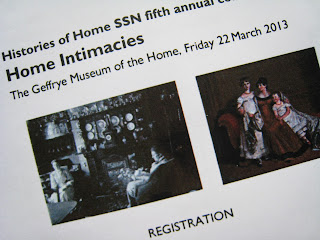 This conference was held in the Geffrye Museum of the Home; it was the fifth annual conference of the Histories of Home SSN. From my point of view the most interesting talk was that by Jane Hamlett, the keynote speaker, on rethinking the Victorian middle class home. She suggested that we should consider intimacy as a way of understanding the demarcations of the home rather than the idea of privacy and the separation of public and private spaces. Other papers considered non-traditional homes such as Sapphic households and institutional homes were also considered from the points of view of intimacy and the keeping of pets. The day ended with two interesting papers on bedrooms. The first by Catherine Richardson and Tara Hamling considered late sixteenth century bedchambers and how their furniture and use changed at that time. The other, by Hilary Hinds, discussed the history of twin beds, which originated at the end of the nineteenth century to reduce the transmission of disease and became fashionable in the early twentieth century when their identical paired form symbolised the autonomy of the partners in a marriage combined with their ‘togetherness’. It was an interesting day which also allowed us a quick tour of the period rooms in the Museum.