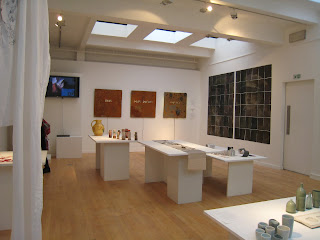 This exhibition and project curated by Alice Kettle and Helen Felcey brings together pairs of makers who share their practice, work together and then exhibit the results. It was interesting to hear the makers discussing the project at an informal discussion in the CAA gallery last week. Alex McErlain led the discussion and explained that the pairings were formed after a ‘speed dating’ event when the artists met each other to discuss their practice. Sharon Blakey described this process as quite nerve wracking, she compared it to standing in the playground waiting to be chosen for a team and hoping that someone would want to work with you. In fact her partnership with Ismini Samanidou, through a shared interest in impermanence, had turned out to be very successful and she felt the process had pushed them both in new directions. The other makers described the process of working with another artist as initially challenging but developing into trust. They also agreed that explaining your practice to another artist and allowing them into your studio was unsettling, but because they all shared an interest in materiality they understood each other, even if they sometimes questioned each others processes. It is an interesting exhibition especially if you know the work of the separate artists and can see how that essence has come through in the pairings.