Treasures of the royal courts 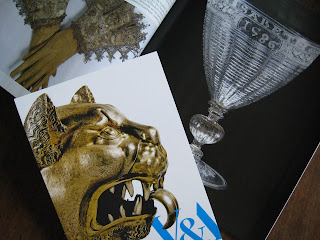 This sumptuous exhibition at the V&A is ostensibly about the story of diplomacy between the British monarchs and the Russian tsars between 1509 and 1685, but it includes several good examples of textiles. There are portraits of Queen Elizabeth as a young woman and many others of her courtiers, all accurately depicting their clothes and jewels. At the beginning of this period there was little lace in costume, but there was plenty during Elizabeth’s reign, which is shown in the portraits and in some artefacts including a beautifully mounted and displayed ruff of Italian needlelace and a pair of men’s gloves with magnificent gold lace, spangles and embroidery. Unfortunately the style of the portraits under the Stuart kings became more fluid so some of the lace appears as an impression rather than as an accurate depiction, but the portraits depict the opulence of the fashions well. In addition to the large portraits there were also a number of miniatures and an interesting video showing how they were produced. I found it a fascinating exhibition from the textile point of view although the highlight of the show is the collection of English silverware presented to the tsars. Apparently, this collection of silver is more extensive and of a better quality than any UK silver collection of the period, because in 1642 most silverware was melted down to fund the English Civil War.