In the name of honour 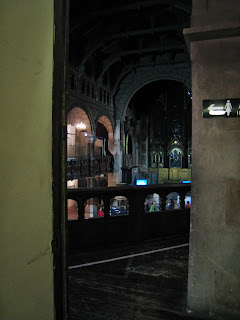 This exhibition at 1 Mayfair considers victims of domestic abuse and honour-based violence around the UK. It doesn’t seem to have been well advertised or to be very accessible and is only open for a few days. When I arrived on Thursday I had to persuade the doorman to let me in to see it and he kindly allowed me a quick look round. I was so pleased he did though as it was a very thought provoking exhibition. The work was for sale so I couldn’t take photos so the image shows a general view of the beautiful building that housed the exhibition.

In the foyer was Lise Bjorne-Linnert’s wall of name tags each one representing a woman who has disappeared and is presumed murdered in Ciudad Juarez, Mexico. I first saw these name tapes and took part in the Desconocida exhibition in Epsom and it is sad to see the number of names has increased since then. Several other artists used stitching in their work to represent these women’s issues including Shadi Ghadiran who showed an image of a woman sewing a spider’s web in front of a latticed window to question how women comply with their own imprisonment in the home. Reena Saini Kallat showed a series of images of women knitting letters in red yarn which spelled out the phrase ‘Our bodies are moulded rivers’ a quote from the German philosopher Novalis. It was interesting that none of these works actually exhibited the textiles only images of them. I felt Lise’s work was stronger because of the physical presence of the textiles.

Other powerful images included those of Asoo Khanmohammadi who displayed photographs of the kitchens of Iranian suicide victims most of whom are young married women aged 15 to 34 years. These images of ordered domesticity were titled Ilam (the place where the photos were taken) and Absence. She also exhibited a photograph entitled Bride which showed a woman dressed for a wedding but wrapped in bubblewrap to consider the commodification of women. Another interesting series of photographs were those in a triptych by Mandana Moghaddam showing a pregnant woman lying in a room with water pooling on the floor around her. The water gradually rose around her and eventually submerged her indicating the overwhelming experience of childbirth. This was a moving exhibition which deserved to be seen by more people.
Posted by Carol Q at 04:30