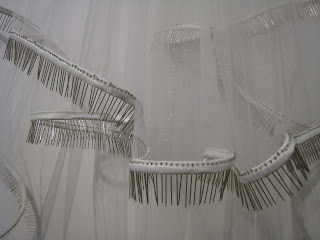 It’s always difficult to know how much information to put on labels. Some galleries insist on dimensions and materials, which I’ve always thought rather odd if you have the work in front of you. For my latest exhibition of veils at the Knitting and stitching show I decided to give a flavour of the concept behind the work to pique the audience’s interest. For example, for ‘Pinned down’ (the veil fringed with pins see pic above), I gave the title and then added ‘A sparkling fringe of pins hides the sharper reality of conjugal bliss and domesticity’. That describes the work but doesn’t explain all the research into nineteenth century domesticity and gothic novels that lies behind it. The veil, and the idea of the pins forming a fringe, clearly resonated with many people and made them smile and those who were interested came over and we had a more detailed discussion about the ideas behind the work and the contrasts evident in using sharp pins within a soft veil. In many cases people were interested in one veil and reading the label made them realise how it related to the other veils and fitted into the body of work on display. The veils are attractive in their own right and I also wanted the labels to convey the idea that they are artworks not bridal wear. I thought that giving some idea of the concepts behind them would dispel that idea. For example, I would have thought that ‘Marriage lines’ with the text ‘Jane Austen’s equivocal view of marriage, pinned in place using her own system of rearranging ideas’ would have deterred most brides. Not all however – as some people did ask if I made bridal veils for sale!
Posted by Carol Q at 01:57