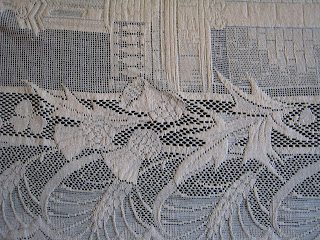 I’ve been studying the flowers and leaves Harry Cross used in his design for the Battle of Britain commemorative lace panel, to get some inspiration for my contemporary response to it. Apart from being amazed by the elegance with which he depicts them I’ve been making a list and found roses, thistles, shamrocks and daffodils representing the four countries of the UK. He also includes plants representing the air forces mentioned on the panel, so we have maple leaves for Canada, protea for South Africa, wattle for Australia, and fern leaves for New Zealand. The panel also includes acorns and what is generally described as wheat or corn along the outer edge, although it does look more like barley with its long ‘whiskers’ fanning out. The image shows some thistles, corn and shamrocks all beautifully drawn and shaded. I need to try drawing some myself now and deciding how to incorporate them into my design.
Posted by Carol Q at 08:50