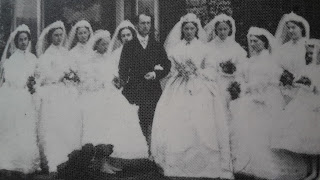 I’ve just bought a small book about wedding fashions and was interested to see what it said about veils. It begins by discussing the weddings of Queen Victoria’s family and says that the veil Princess Alice wore in 1862 was designed by her father Prince Albert, although sadly he died before the wedding. The photograph in the book is not very clear but I did track the veil down in the Royal Collection and it appears more like a shawl in shape, with little gathering. She wore it thrown back from the face with orange blossom in her hair. When Princess Alexandra married Prince Edward a year later she and her bridesmaids all wore veils falling over the backs of their heads from wreaths of flowers. This fashion often made it difficult to distinguish the bride (see the image above), however by the end of the century it was generally only the bride who wore a veil and the bridesmaids wore hats. In 1871, Princess Louise wears a similar style of veil to her sister also hanging from the back of her head with flowers at the front. All the royal brides wore white although many ordinary women just wore their best dress whatever the colour with a bonnet or veil. I’m looking forward to finding out more.
Posted by Carol Q at 02:25