Commemorating the Battle of Britain lacemakers 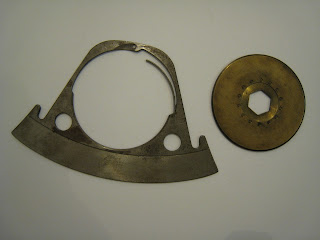 As part of my response to the Battle of Britain commemorative lace panel I wanted to remember the people who made the lace as well as the aircrew and civilians involved in the battle. To do that I decided to include representations of their tools in the panel, in the sections separating the images of the bombed buildings. I took photographs of the equipment used in machine lace making and decided that I would represent the draught pattern, the jacquard cards, the bobbins and their holders. The draught pattern is used to transfer the original design into a grid form and to distinguish the threads used for the pattern and for shading. It is a skilled job, as the success of the design rests on how well it is converted to the grid. Harry Cross the designer of the panel obviously recognised that skill as he acknowledges the two draughtsmen, J W Herod and W R Jackson, in the panel. The next step after draughting is punching the jacquard cards from the draught. These are sewn together in a long line and as they run through the machine they control the stitches being made. Also essential to the process is the smooth running of the thread from the bobbins so I decided to include the bobbins and their holders as well. I’ve made textile representations of these four tools and used them to form the patterns between the main images to remember all those people who made the production of the lace panels possible. Unfortunately I can't seem to add new images to my blog atm so I've had to use a picture I've used before of the bobbin and holder.
Posted by Carol Q at 01:45