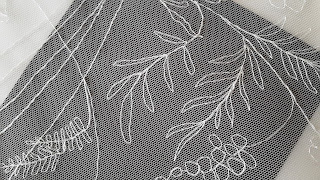 This is the traditional time of the year for looking back at what you’ve achieved and looking forward to future plans so I’ve been assessing my lace plans. The past year was mainly taken up with my Battle of Britain lace response which involved designing and working on the panels but also included photography and talks about it as well. That work will continue this year with a talk at Bentley Priory on 26 January and another on 15 March at Wollaton Hall where the panels will be displayed for the first time. After that the panels and the associated parachute installation will be exhibited at Gawthorpe Hall from July to November and following that at Bentley Priory from November through to March 2019. 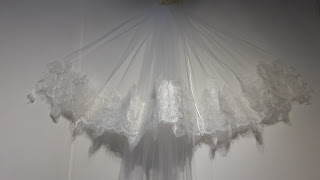 Other lace plans include a stand at the ‘Living lace’ exhibition during the World Lace Congress in Bruges in August and an exhibition of my work at Cranmore Park in Solihull as part of the Makit Christmas Fair on 1 December. I think for both of those exhibitions I’ll concentrate on my veils as they are a coherent body of work with a definite theme and I’m currently making a new one so there will also be something new to show too. As well as all this practical work I’d also like to get back to my research into net curtains and panels, which has been concentrated on the Battle of Britain panel for the past year. It would be good to get back to some of the earlier machine lace I was studying previously and drawing some of that research together. So, in summary, an exciting year ahead with lots of new projects and exhibiting opportunities.
Posted by Carol Q at 10:49