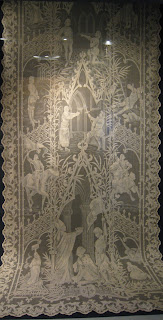 I took this photo of the Joan of Arc lace panel at Calais Lace Museum. It depicts scenes from the life of Joan of Arc including her triumphant inspiration on the battle field and her death at the stake. It is a panel of curtain lace and was made by the Nottingham lace company of Dobson and Browne for their stand at the 1881 Paris exhibition. This panel was also the inspiration for the Battle of Britain lace panel made by Dobson and Browne 60 years later. The story is that in 1942 the Managing Director of the company was talking to colleagues at the company bemoaning the fact that so few old pieces of lace had been preserved. One of them then went and found the Joan of Arc panel in a cupboard and showed it to him. He was so impressed by it that he suggested the company should produce a lace panel commemorating the Battle of Britain. Both panels are a similar size and follow a similar style, having individual scenes down each border and a central area with larger images, all finished with a scalloped edging. The Joan of Arc panel was bought by the Calais Museum in 2009 and added to their collection.