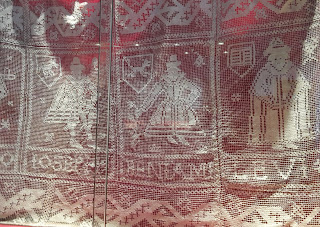 I saw this interesting piece of filet lace at the Lace Guild exhibition ‘Hidden in stores’ last month, labelled in the catalogue as depicting ‘the sons of Joseph’. It was loaned from the Dr Spriggs collection and is thought to have originated in Italy in about 1600. That date or slightly later fits in with the costumes of the figures in fashionable Jacobean dress. However, I think the panel actually depicts the sons of Jacob, as Joseph only had two sons and this is clearly a large panel with many characters. Jacob famously had 12 sons including Joseph, Benjamin and Levi whose names can be seen in the image. Their story is told in the Old Testament book of Genesis. Federico Vinciolo’s pattern book for lace and embroidery, published in 1587, includes several figures but these are in classical rather than contemporary dress. However many examples of filet lace from that time (there are some in the V&A) depict figures in fashionable costumes so perhaps these panels were one-off designs specifically created for this piece of lace.