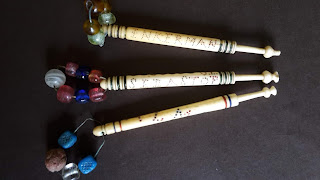 These bobbins celebrate battles from the Crimean War (1853-1856). It was one of the first conflicts from which British newspaper correspondents sent back reports and photographs so the population at home were aware of the conflict and many lacemakers would have had relatives in the army and therefore had a personal interest in the outcome. The war began following arguments about access to Christian sites in Palestine and Russian attempts to obtain land in the area. In September 1854 the British, French and Turkish forces landed at Eupatoria and began marching to Sebastopol, the capital of Crimea and the base for the Tsar’s Black Sea fleet which threatened the Mediterranean. On the way they fought the Russians at several battles including Alma and Inkerman, which are also commemorated on the bobbins. The siege of Sebastopol lasted from October 1854 to September 1855. The conflict ended with the Treaty of Paris in which Russian power was curbed and the Turkish state was reinforced. The battles and the conflict clearly attracted public interest. These bobbins were probably made by James Compton and the Springetts in their book ‘Success to the lace pillow’ suggest that they were made as stock rather than as special orders so there was obviously a market for them.