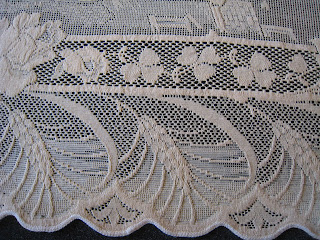 The Battle of Britain commemorative machine lace panel made in the mid 1940s will be back on display at the Nottingham Castle Museum next year in the new lace exhibition. However if you can’t wait that long, one of the panels is on permanent display at Bentley Priory Museum in Stanmore, London. The reason I’m blogging about it today is because I’m taking part in Jane Fulman’s lace challenge on Instagram and today’s prompt is ‘grounded’. A panel about an airborne battle may seem a strange choice for grounded but in fact I’m referring to the numerous ground stitches within the panel which give it such a sense of shading and three dimensionality. For example the wheat ears include five different stitches and even the shamrock leaves include two woven areas, one slightly thicker than the other. The image above the edging shows the ruin of St Clement Danes, which was devastated by incendiary bombs in 1941. It has since been rebuilt and dedicated to the RAF. The level of shading on this, and the other images depicting the bombing of London, is amazing and allows the details of the scenes to be shown. The Battle of Britain panel celebrates the bravery of those who took part in the battle but also celebrates the skill of the machine lacemakers who made the panel.