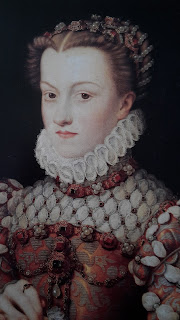 The fashion for ruffs began in the early 16 century, around 1530, and started as a simple ruffle attached to the neckband of a linen smock. By the 1550s layers of ruffling were attached one above the other to give a fuller look, particularly at the sides and back. It was in the 1560s that ruffs took on their figure of eight appearance and during that decade layers of ruffles gave way to a single ruffle with more height and depth. This style continued to be popular in the 1570s when the individual figure of eight ruffles could be 4 inches high. Until that time, the ruffles had mainly been edged with embroidery or cording but in the 1570s lace edgings became more fashionable. The image above shows Elizabeth of Austria, who was Queen of France, wearing an early figure of eight ruff with a delicate lace edging.