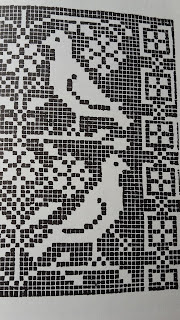 I've been studying some of the filet lace designs given in Federico Vinciolo’s 1587 book of lace and embroidery patterns and comparing them with more modern pieces. The book was very popular and was reprinted at least 17 times between its inception and 1658. No instructions are given with the patterns, it was obviously assumed that needlewomen of the time would know how to work them. In the filet or lacis section of the book the patterns are reproduced on a square ground and in some cases the number of meshes it covers are enumerated although this could be deduced from counting them on the grid. 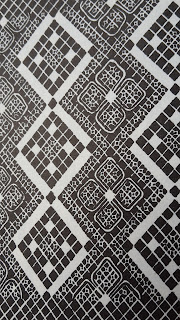 Some are square geometric designs, others are sections or corners of a design. Some are specifically labelled as handkerchief edgings, but they are 35 meshes wide so would have been quite wide. Some of the patterns are figurative with gods and goddesses representing the seasons as well as hunters with dogs. There are also individual animals such as a stag, peacock, lion and pelican as well as mythical beasts such as unicorns and griffins. 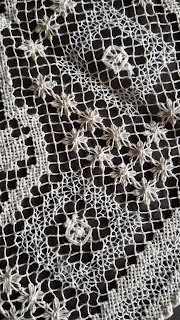 Although most of the patterns are just made up of white blocks on a black grid I was interested to see a few that included some filling and outlining stitches which I’ve come across in contemporary pieces.