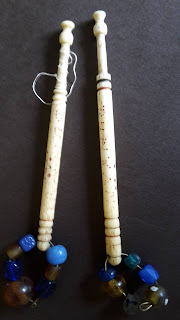 John Bunyan was a seventeenth century religious writer and Puritan preacher who was born near Bedford and spent most of his life there. He was popular among lacemakers particularly those who lived in and around Bedford. For many lacemakers the only books they would have possessed were the Bible, the prayer book and a copy of Bunyan’s famous allegory ‘The Pilgrim’s Progress’ which was often given to children as a prize at Sunday School. However, it is thought that the lace bobbins inscribed with his name were made in 1874 when a commemorative bronze statue was erected to him in Bedford facing the High Street.

The bobbin maker in this case seems to be the person the Springetts call ‘the blunt end man’. They have not been able to identify him but he seems to have close ties to Bedford as his bobbins often commemorate events in the town such as the erection of this statue as well as hangings at Bedford gaol. He also made bobbins inscribed ‘From Lesters’ (see my post of 22 July 2018) for the Lester family who were lace buyers in Bedford to give to lacemakers for good work. As the name the Springetts have given him suggests his bobbins were not particularly elegant. In general they are quite basic with a brief inscription in simple lettering which often twists slightly around the bobbin suggesting they were worked on the bench and not while they were still in the lathe. However, many of these bobbins are now highly prized because of the events they commemorate.