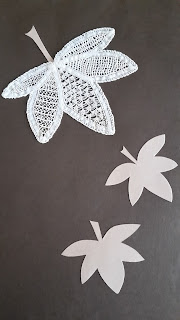 In my latest lace mat I’ve been using a form of tape lace that is common in Eastern Europe and involves working bobbin lace in lines that curve and join each other as the work progresses to form the pattern. However there is another type of tape lace, shown in the image above, in which a ready made tape is used to form an outline and the open areas are then filled with needle lace fillings. This type of lace was simple to make and was common in the 16th and 17th centuries in Italy and France. It then fell out of favour but saw a resurgence following the development of machine made lace tape in the 19th century. It is made in many places but became associated with Branscombe in Devon in the mid-19 century where the outlines were made using fine tapes from France into which delicate needle lace filling stitches were added. 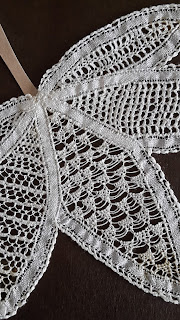 The examples here are basic samples I made a while ago but they show how the lace is made. The outlining tape is tacked on to a backing for working using a continuous tape that is folded at joining points and sewn down onto itself rather than cutting it off and having to neaten the edge. When working a curve a basting line is run round the edge of the tape so it can be pulled up neatly to make it smooth. The filling stitches are then made in needle lace using a combination of fine buttonhole stitches worked in various patterns and joined into the work on each side. In this piece I also worked a purl edge around the outside of the design. Once the lace is complete the tacking stitches are taken out and the lace lifted from the backing. 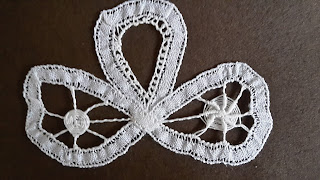 Although the leaf design shows a variety of fairly dense stitches, the simple trefoil here shows how easily the spaces can be filled with just a few twisted threads and spider fillings making the work quick to produce if it is being made for sale. Many commercial handmade lace mats are now made in this way and with their combination of open work tapes and simple filling stitches they can be very attractive.