Out of the ordinary: spectacular craft

This exhibition at the V&A runs from 13 November 2007 to 17 February 2008. It includes eight artists who use crafts in a modern way. Their aim has been to transform the ordinary into the extraordinary and they have achieved this. 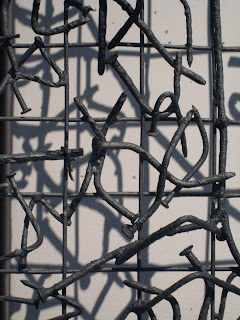 Olu Amoda uses nails and found metals objects to produce sculptures that have a very lace-like quality. He says that nails are small but lethal: a nail is able to defend itself but yields to the will of the craftsman – as do the pins Anne Wilson (see below) uses, and those used by lacemakers. 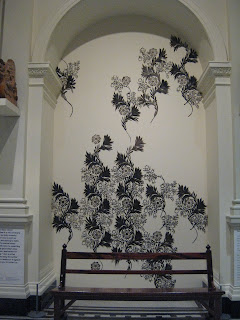 Catherine Bertola creates site specific installations that tell a story about the history of a space. She has used dust collected from the Museum to produce wallpaper that reflects on the past. I thought the way she had used units of cut paper to do this was useful to bear in mind for my own practice.
Annie Catrell uses glass to produce images that make the invisible visible and the ethereal solid. Her glass towers appear to trap tiny scraps of cloud.
Susan Collis produces work that at first appears to be stained and marked but on closer inspection reveals itself to have been finely worked.
Naomi Filmer is a jeweller who celebrates the human form by producing casts of different parts of the body and isolating them in glass lenses. 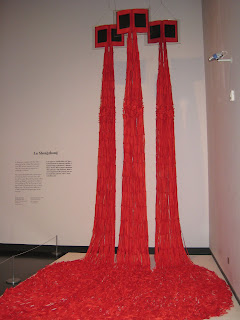 For this exhibition Lu Shengzhong has cut paper shapes out of red paper. They surround you on two sides and tumble from a book shape above you so you feel engulfed in red paper.

Yoshihiro Suda has created tiny weeds from wood and has planted them around the Museum in unexpected places. 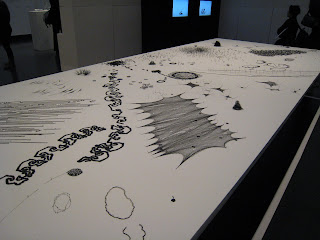 Anne Wilson and her team have produced a large map-like drawing on a table using bits of lace and pins. She has also used an animated film to show how the piece was made. The use of lace and pins in a non-lacemaking sense was interesting – the pins were used to pin down the lace specimens like insects rather than aid their production. The animated film was very effective and gave the pieces of lace and the pins a life of their own.

One of the main themes of the exhibition was show much collaboration there had been between the makers and those helping them to produce animations, sound tracks and display materials. Craftsmen are no longer working on their own in a vacuum. Craft has become a collaborative process. However, this may lead to problems with authorship, some of which were addressed in the symposium ‘Fabrications, craft in the 21st century’ which coincided with the exhibition.
Posted by Carol Q at 00:58