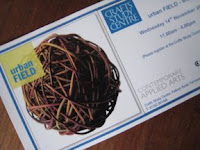 This symposium was organised by the Craft Study Centre and complemented the Urban FIELD Exhibition held there earlier in the year. The aim was to bring the rural and the urban into contact. The first speaker was Deidre Figueirdo who spoke about promoting craft practice in the urban setting among immigrant communities. Love Jonsson talked about the revitalisation of Swedish crafts and how craftspeople are now talking about their work in terms of craft not art or design – they are reclaiming craft with pride. They are making functional items rather than art works. He helped to set up iaspis a Swedish initiative aimed at involving Swedish craft in the international scene. Sabrina Gschwandtner the founder of KnitKnit magazine spoke after lunch. She told us how knitting in the USA is being used as performance art, graffiti and sculpture. The Graffitti group in Houston, Texas, enclose things in the street, such as door knobs and telegraph poles with knitted cosies then record people’s reaction to them and publish them on MySpace. Sabrina described other contemporary knitters including Dave Coles who makes conceptual sculptures, such as a huge teddy bear made out of insulation wadding, and Kat Maser who made the Nike protest knitting - both shown in the Radical lace and subversive knitting exhibition. Finally Ian Hunter spoke on repositioning the crafts in the context of rural regeneration and environmental sustainability. It is encouraging to see the crafts being revitalised and used in modern subversive ways. I liked the knitted graffiti. The day after the symposium I saw smoothie bottles in Sainsbury’s with little knitted hats on promoting a scheme to help the aged – so they weren’t being subversive just used to represent the elderly – bands of knitting would have been subversive but hats weren’t. That’s the fine line in crafts - you can be ironic but there is the danger that it comes over as kitsch or even the other way round!
Posted by Carol Q at 03:41