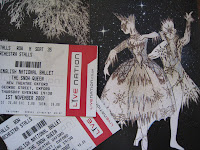 We went to see the Snow Queen at the New Theatre Oxford on Thursday night. Lots of interesting costumes particularly the red and black ones for the gypsies, the white lace-like ones for the snow maidens and the snow leopard costumes. The dancing, sets and costumes were good but somehow it lacked the wow factor we were hoping for. After some thought we decided that was because the principal dancer had no main male partner so there was no set piece pas de deux to impress us.
Posted by Carol Q at 09:56